There is no doubt that Microsoft, Google and Apple are investing heavily in AR and VR. Personally I think their vision must be a 3D “Google Maps” or “Apple Maps” that works just as well indoors as outdoors.

Even though the technology and hardware has come a long way, there are two big obstacles in desperate need of a solution to achieve this vision:

We are far from there. But I think we can make some fair predictions based on history. These companies have been in a similar situation before – with outdoor mapping technology.

Microsoft kicked things of regarding online GIS when they acquired MapBlast and moved into mapping for the masses. The cellphone industry pushed the positioning abilities, standardizing small GPS-hardware that got possible to mass-produce. Apple introduced the iPhone and Google bought Keyhole and mapping technology.

But how did Google fill their map with map data? Licensing maps has traditionally been costly and tricky, depending on your part of the world. The answer is: they both acquired map data and started creating their own content. This was never heard of before (on a global scale). Apple Maps has basically followed the same route. In short, they acquired data and companies making it possible to maintain a global map that can support navigation and drive business. (Even though it got off to a shaky start).

Now imagine the visionaries at these companies thinking of AR-devices where you can walk into any store and get real time and exact information navigating you through the aisles of groceries to what’s next on your shopping list.

They miss two key ingredients to cook that soup:

First: Standard GPS doesn’t work well enough indoors. And as insides of buildings tend to be more filled with stuff, we need even faster, easily available and more accurate technology so you don’t bump into things when following directions.

Second: How will these companies get access to the indoor map and building model data? Who owns this data and how can it get accessible in real time on a global scale?

I think history will repeat. Today indoor-positioning technology certainly exists, but currently not as standardized as GPS where you can mass-produce small hardware that just works. Most solutions also depend on a great deal of setup – either with transponders or mapping WIFI-signatures, Tango technology or Apple Venue solutions etc. It’s just not omnipresent yet. Accuracy is often an issue.

Someone hopefully sits on the golden egg here but I’m not sure that we have seen it yet. It’s a challenge that must be solved and I’m convinced that the key will be found somewhere in Microsofts, Googles or Apples surroundings.

And these companies will likely pressure the tech-companies that today “own” the BIM-market. They need this BIM-info for the indoor maps. Today, exchange of BIM-info really is a challenge from a technical perspective. It’s hard to integrate due to lack of reasonable standards and openness.

This is a very similar situation to when online-mapping started. And remember how that was solved: They bought data and companies to handle the technical and ownership challenges.

So when will this happen for BIM? I’m constantly looking for big news about this subject in media. I would not be surprised if we soon see a major deal between Google/Apple/Microsoft and some major GIS/CAD/BIM-companies.

And the journey really begins when someone finds the golden egg and releases the magic chip that does true, ubiquitous, easy setup, indoor positioning in real time. (Maybe some mirroring-technique that can bounce the satellite signals indoors?)

These events will change the world.

For mapping companies and GIS-specialists the market really changed then, from a “special field” to the mass-market, redefining the GIS-business completely.

There is no doubt in my mind it will be a similar situation for the now so hyped BIM-market. The question is when?

I’m certain that these big companies now realize that the border between indoors and outdoors must be erased. So, there might be a “storm” coming… Will BIM systems get added GIS-functionality or will it be the other way around? I suspect there really will not be a distinction between these types of systems. Many years ago, you either used “raster” or “vector” GIS systems. There really is no distinction today… Expect similar blending between GIS and BIM…

Meanwhile, serious BIM and AR-integration is for companies working closely with clients realizing the value of BIM-data in combination with GIS. Then with the right knowledge and powerful tools magic can happen: 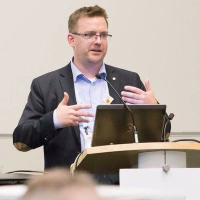